Updating the BSN Firmware on an ALTA Gateway

Each Monnit gateway has a chip called the BSN (Base Station Node also referred to as APN). This chip controls the radio transmission of the device. There is firmware on these chips that execute the radio operations. In the Alta line of gateways, these chips have upgradeable firmware. While the process to update this firmware is a manual process that must be done by Monnit Support on the backend, processing this firmware update generally results in better performance of the sensors. Recent improvements to the Gateway BSN Firmware include:

When a Gateway BSN Firmware update might be helpful

As mentioned above, the update is currently a manual process that is performed by Monnit Support on the backend. Monnit does have plans to offer the BSN Firmware update as part of the UI of the iMonnit.com Online Portal in the future. But currently, it is strictly a Support operation. The BSN Firmware update process is similar to the standard Gateway Firmware Update in reliability and minimal risk. While there is some small risk in performing the BSN Update, it should have no negative affect on the gateway’s operation in the event of failure (though in an extremely small number of cases, it may require power off/on of your gateway, or sending the gateway to Monnit to be reflashed). If the attempt is not successful, the gateway should revert to its current BSN Firmware and continue operation.

In order to perform the update, the gateway must have its Gateway Firmware up to date. You can perform that update through the iMonnit Online Portal while your gateway is checking in.

If your Alta gateway is running firmware prior to the version 18.38.1.9, BSN Firmware can likely be updated. You can check the current version of Gateway and BSN Firmware by using the Lookup tool. 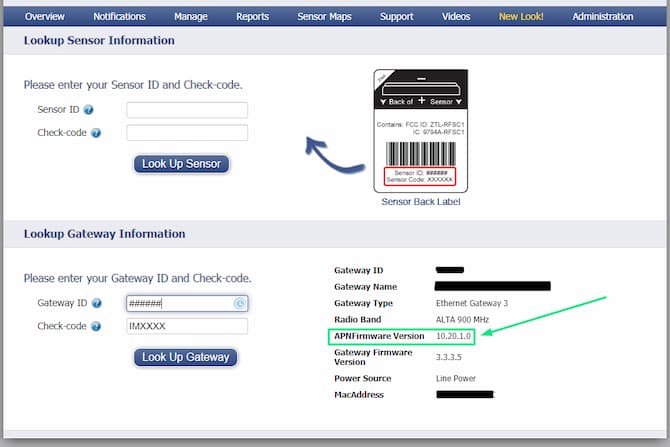 If you expect that the BSN update can help your sensor performance, feel free to reach out to support@monnit.com with the ID of your gateway, and we can perform the update.