Monnit devices are offered in two generations. The ALTA line and the Commercial line operate with different radio hardware. The first generation products were developed by Monnit prior to the release of ALTA. There are unique characteristics and behaviors which means they are not cross-compatible. This article will outline the differences between the two generations and unique features of the ALTA line.

Identifying the generation of a device

Physical appearance
When physically examining the hardware, the ALTA line will have a white and blue label marked with the ALTA label. Both devices come in the same Coincell, AA, and Industrial enclosures, but Commercial devices will generally have a black label marked with “Monnit” in white letters and/or a colored label. 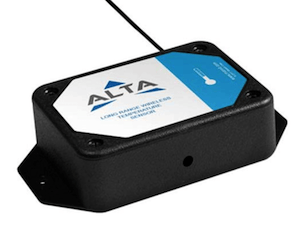 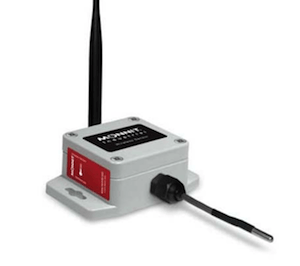 Looking up the generation type
If you are unsure of the generation of your device, you can use the tool at the following link to determine which generation to which your device belongs. ALTA Devices will list the word “ALTA” in the Radio Band field. You will need the sensor ID and Security Code to perform the lookup.
https://www.imonnit.com/lookup

There is a fundamental difference in the radio technology with which each generation operates. While the Commercial devices transmit on a specific designated channel within the frequency range for that sensor, ALTA devices use Frequency Hopping Spread Spectrum (FHSS) technology. This increases the reliability and range of the radio communication. This difference is the primary reason ALTA devices do not communicate with Generation 1 devices.

When an ALTA sensor first communicates, you will see 4 or 10 transmissions, 30 seconds apart. This is a result of the sensor completing its initial start up test and handshake with the gateway. This is generally referred to as the sensor “Joining” the gateway. After the initial handshake, the sensor will begin to check in on the scheduled heartbeat.

When an ALTA sensor enters Link Mode, it attempts to seek out a gateway with a “cascading” approach. This is to say that after it loses connection to a gateway, the sensor attempts to seek out a gateway more frequently at first, and tapers off the number of attempts it makes to find a gateway. After losing connection, ALTA sensors scan for new gateways at 0 seconds, 5 seconds, 15 seconds, 30 seconds, 1 minute, 2 minutes, 3 minutes, 5 minutes, 15 minutes, and finally then default (1 hour). Once it hits 1 hour it will scan at the default interval repeatedly until it relinks to a gateway.

Most ALTA sensors store up to 512 readings in memory. Most recent versions of sensor firmware (14.x.x.x) store up to 3200 readings. Additionally, sensors running firmware 14.x.x.x and later have the ability to store readings even after being powered off for short periods. This means if the sensor loses connection with the gateway and subsequently the battery for the sensor is depleted, the readings logged prior to the battery depletion will be transmitted after power is restored to the sensor.

Many of the more recent sensors such as Water Puck, Vehicle Detect-Counter, Air Quality PM 2.5, CO2, Air Velocity, H2S, Propane Tank, and others are available only in the ALTA line. Other previous sensor offerings such as the Seat Occupancy, Compass, Flex, Liquid Level, and others are available only in the Commercial line. If you are interested in a sensor offering specific to the ALTA or Commercial line, consult your salesperson.

ALTA and Commercial (first generation) sensors also have differing support in various versions of Monnit software. For example, ALTA sensors are not supported in the legacy version of iMonnit Express (version 3.1.2.10 and earlier). For a list of sensors and software compatibility, you can visit the following link. There is a drop down menu toward the top left where you can select the generation type.
Software/Device Compatibility Comparison

Monnit revolutionized the IoT industry with its first generation Commercial line of sensors. Once again, Monnit has raised the bar with its ALTA brand of wireless devices. Our second generation products offer a sensor catalog and feature set which is the gold standard for IoT sensors. Feel free to contact Monnit Support with additional inquiries.