If an Ethernet Gateway 4 is not Connecting to iMonnit Online

Note: In the event a gateway requires repair, best-effort troubleshooting steps as directed by Monnit Support must be taken prior to the issuance of the Return Material Authorization form (RMA) required when returning a device to Monnit for diagnosis and/or repair.

When an Ethernet Gateway 4 (EGW4) will not connect to iMonnit Online:

The EGW4 operates on a local Ethernet network which requires a connection to the Internet to deliver data to the iMonnit Online portal (also known as the Default Interface) over outbound TCP port 3000. There are a few conditions which must be met in order to allow for the traffic to be successfully delivered to the iMonnit Online portal. This article will address these requirements and provide steps for diagnosis of any issues.

If the “waterfall display” does not complete, the LED’s will display a solid sequence. Please contact Monnit with the gateway ID and a description and/or image of the LED sequence.

Note: The Ethernet gateway does have a local configuration page which can be accessed through a browser. In order to access this page, you will need to find the IP address being assigned to the gateway via DHCP the first time it is connected to the Ethernet network. The gateway does not have a default IP address unless you enable the Auto IP feature of the gateway, and generally requires DHCP the first time it is configured. Also, the gateway requires a physical action to activate the local configuration page.

Note: Be sure to enable the spanning-tree portfast feature (common on many Cisco routers/switches). Also, some older Ethernet Gateways may struggle to operate with partially compressed DNS responses.

Confirm the network allows for traffic to the Internet over outbound TCP port 3000 (inbound port is not specified), and that the DNS server on the network can resolve sensorsgateway.com

Note: To use the gateway with the default iMonnit Online portal, there must be a valid Internet connection available to the gateway by which it can deliver traffic through outbound TCP port 3000. The gateway must also be able to resolve the domain sensorsgateway.com (IP address 68.169.16.253) using your network’s DNS server.

Once the gateway is connected to the local Ethernet network, it will attempt to resolve the domain sensorsgateway.com. If that is successful, the gateway will attempt to send data to the Internet over TCP port 3000. The middle “Server” LED represents this connection to iMonnit Online over the Internet (and generally represents the connection to the Monnit software being used). If the network accommodates this transmission, the middle LED will turn green and the gateway will check in with the iMonnit Online portal. At that point, all three LED’s will illuminate green. If the network does not accommodate this transmission, the middle LED will go red. At that point, you will want to examine the network configuration and confirm the firewall does not block TCP port 3000, and that the DNS server is able to resolve sensorsgateway.com.

A useful tool called the Communication Check Utility which can be run on a Windows PC connected to the same network segment can be found at the following link. If your gateway has been added to your network in iMonnit Online, you enter the ID of your gateway, leave the Use Defaults option checked, select Ethernet Gateway, and click the Check Communication button, the tool will attempt to resolve DNS and send a pseudo-check-in from your gateway. If the test is successful, there is no issue with DNS or TCP port 3000 being open on that network segment for the PC. This does not necessarily mean there is no issue with the network (as there may be specific security applied to the gateway’s connection), but it is a fairly good indicator of this. 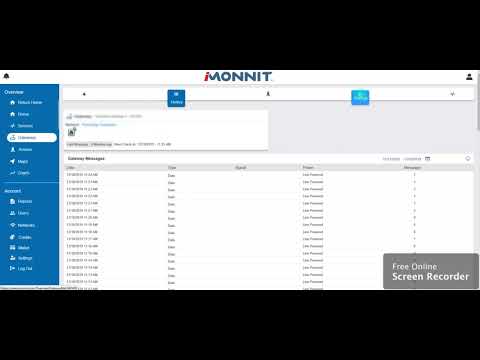